Few Dutch neighborhoods have so commonly been the topic of debate and conversation as the world famous Red Light District, in Dutch better known as De Wallen (The walls).

Many foreigners visit it in awe, praising its vibrance, liberty and openness. But if you ask a local they would probably start a twenty minute rant about the problems AirBnB causes, the omnipresence of Nutella and ice cream, and drunk tourists who don’t give a fork about our culture and history. And it’s true; Amsterdam, with a population of less than a million, welcomes more than 20 million visitors each year, most of whom visit the Red Light District at some point, and the neighborhood has taken its toll.

It took a pandemic to halt this growth, and now for the first time in more than a decade, there’s a tranquility and calmness to it which allows us to start re-appreciate how much beauty and story there actually is in one small space: the oldest neighborhood of Amsterdam, with tons of historic buildings, canals, but also prostitution, coffee shops, a China-Town

The Wallen area is actually much bigger than just the Red Light District, but for this walk, we limit ourselves to the most famous part of all. The part most locals tended to avoid at all cost. The ultimate trap of tourist traps. Group tours are forbidden as per April 2020, so a walk really is the way to discover it now!

Calories: 140
Directions: Hit this Link, then click the top right corner of the map to open full screen in Google Maps

FYI: the technology behind Google Maps is sometimes a bit shaky, so sometimes you need to click the link more than once, or zoom in to get the route view. Apologies for the inconvenience.

How many coffee places do you know that are in the garden of an old church? At least one now! De Koffieschenkerij is one of the most special places to enjoy your cup of cciono. The staff is very nice and you’ll sit in the sun most of the day as the garden faces the south.

The oldest building in Amsterdam, in Dutch gothic fashion, its foundations originating from 1306. It used to be a Catholic Church, named after St. Nicholas, the patron saint of Amsterdam (and a child’s friend!). In fact, for centuries Amsterdam was even a place of pilgrimage, with more than 30 monasteries built in the vicinity. Many street names still remind us of these catholic traces.
The Oude Kerk was one the churches raided during the iconoclasm, and after the Alteration in 1578 it became a Protestant church. If you want to know more about how the Catholics proceeded from there on, Museum Onze Lieve Heer op Solder? is just around the corner.
Nowadays the Oude Kerk rises proudly above a maze of liberal diversity. How many places in the world are there where you can find a church, a tattooshop, a kindergarten and several prostitution windows all on one square?

Should there still have been any doubt as to whether it’s allowed to take pictures or not: here’s your answer.
The narrowest alley of Amsterdam (99 cm at its narrowest spot) takes you to the more sheltered, and, therefore, much more frequently visited prostitution windows in the district. This whole block of connecting side alleys is called the St. Anne’s Quarter, a much more intimate and private side compared to the canals, with even a public indoor section.
Since 2012, a lot of the prostitution windows have been replaced by local enterprises as part of a municipal project called project 1012 (the area code of the Red Light District). If you look closely at the windows of these new hip shops and bars, you can still recognize where former businesses that used to be there.

Hidden directly behind Dam square is the famous tasting spot of Wynand Fockinks jenever. This brand (formerly family-owned) dates all the way back to 1724, and the building itself is, as you might have guessed by now, from 1679.

With the spices being shipped from all over the world, the jenever industry flourished during the Dutch Golden Age. Fockink grew to be one of the major brands within the Netherlands, delivering products all over the world. Nowadays it’s property of the once rival brand Bols, but they’ve kept the name for historic purposes (and branding purposes, we’re sure). Fockink, Bols, all-around just great company names!

You can taste all kinds of flavored jenevers the traditional way: sipping first without touching the glass, which is? filled to the very top because that’s what I paid for, right?? (Dutch trading mentality).

A few buildings towards the canal you can actually see the boilers of the distillery.

Also: did you know that this alley housed some of the very first brothels in Amsterdam v Jenever know what you might find between your seat’s cushions.

Hidden between two crowded canals and modern architecture stands one of the few guild houses we have left in Amsterdam. Guilds played an important role in Dutch society for centuries, before they were disbanded in 1798. In many ways, they can be seen as the predecessors of the unions. This one in particular was the guild of the wine buyers. The building itself stems from 1611 and was first used as a residence, then a tavern, and eventually the guild bought it in 1630. On the pediment of the gate entrance you see Pope Urbanus I, the patron saint of wine cultivation.

Highlight E: He Hua Temple (Temple of the Lotus Flower)

Amsterdam’s China Town is the second oldest in Europe, after London. In response to major strikes in the major Dutch port cities in 1911, the unions tried to replace local sailors with Chinese migrants, mainly from England. A few thousand of them settled around the Amsterdam harbor, in what soon developed into a unique part of town.
This buddhist temple was built much more recently, in 2000. Before the temple was built, this space was a children?s playground (and a hotspot for heroin junkies in the 80’s – classic!). The temple is dedicated to Guan Yi, the bodhisattva of compassion and wisdom, with her thousand hands and a thousand eyes. It’s now become one of the more prominent and iconic buildings in China Town.

This is the oldest lgbt-bar in the Netherlands, quite possibly in Europe. Started by the famous Bet van Beeren in 1927, this pub hosted people of all kinds: sailor, police, prostitute, gay, lesbian? it really didn’tmatter.
During World War II, Bet would even welcome Nazi soldiers, creating a trust relation with them. This came in handy, as weapons from the Dutch resistance movement were actually being stored upstairs. The bar closed in the 80s, when the Zeedijk was overrun with drug problems (opium, heroin), but reopened its doors in 2008.
The Netherlands was the first country in the world to legalize gay marriage in 2001, and most people were glad to know that ‘t Mandje has become an official wedding spot for gay couples.
But beware! If you go inside, you will find dozens of ties hanging from the ceiling. Bet van Beeren took out scissors to cut the tie from every cheating man she caught?

Look up. Can you see our little friend with the mohawk? It’s a typical niche, originally built for a statue of Maria, which was never created.
This old, almost castle-like building has had tons of owners and functions throughout the centuries: a mayor’s house, a brewery, an elderly home, a hidden church.
On the waterside it says 1890, the year of the big renovation. The oldest parts of this building date back to the 15th century.
During the 80s this building fell in decay, and the municipal government was planning to demolish it. Squatters moved in and negotiated for more than 8 years, until they had agreed on a new purpose: studios for theatre and music.
Thanks to them, this ancient building still stands instead of something modern that would have taken its place. To honor their victory, our little squatter now stands proudly in Maria’s place, illuminated at night like a true saint.

Warmoes is an old Dutch word for vegetables, referring to the vegetable market that used to be held here in the first centuries of Amsterdam’s existence.
It is the oldest street of Amsterdam, together with the Nieuwendijk. Most Dutch people know this street because of Bureau Warmoesstraat, the police office of the famous Baantjer detective series. Others might know it from the gay scene, with subtly named clubs like Dirty Dicks or previously the Cock Ring.
Fewer people know that before Amsterdam expanded with its famous canal ring, it used to be the Warmoesstraat where the wealthiest people lived. If you take a moment to look up, you’ll find some of the oldest houses and monuments of the city amidst the crowds of tourists.

The above highlights are just some of our favorite spots along the way. If something catches your eye while en route, share a picture with us so we can share with the group next week.Emailis the best. 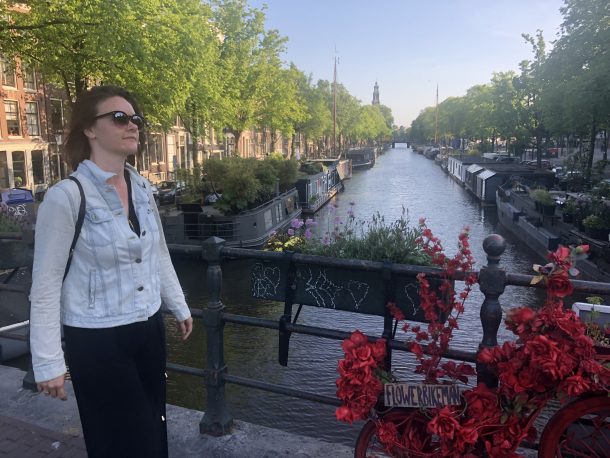