In the 17th century Amsterdam was one of the most important capitals for trade. Merchants from all over the world traveled back and forth from Amsterdam bringing back herbs, spices and other exotic goods. This was the city’s so-called Golden Age! The city started expanding and around 1650 the Eastern Docklands were made. These islands had a favorable location for ship wharves and supply companies, close to the Oosterdok and the river IJ. The admiralty of Amsterdam built their naval warehouse there, now (well) known as the Maritime Museum, and the V.O.C. (East India Trading Company) had a warehouse on one of the islands. Since then, it has seen a lot of change, most of the old wharves and housing has been replaced for new buildings. So let’s take a walk and see if we can find some hidden historic gems!

FYI: the technology behind Google Maps is sometimes a bit shaky, so sometimes you need to click the link more than once, or zoom in to get the route view. Apologies for the inconvenience.

Want to sign-up for our Weekly Walks? Fill in the form at the bottom of this page, or read more about the Weekly Walks.

There are a couple of really nice places for you to take a break in this area. By and large, Mediametic has to be one of our favorites. Nice and quiet in the middle of the buzzing city and also surrounded by history on all sides. Mediametic became pretty well known as one of the first places to open during Covid, as they had installed tiny greenhouses for their guests to safely have food. With an amazing view on the impressive Nemo and the large body of water in front of it, Mediametic captures the charm of Amsterdam.

Let’s start at the oldest building of the route! The Maritime Museum is located in the former naval warehouse, designed by Daniel Stalpaert. A building dates back to 1656 to be used to store weaponry, flags, and sails for the Dutch fleet. It also had storage for 40,000 litres of rainwater used as drinking water for the fleet. The naval warehouse was built in a record time of only 9 months. The reason for the rush came from the necessity to equip the Dutch fleet so they could defend the merchant ships at sea. In 1791 the warehouse burned down but it was rebuilt immediately except this time it took a little longer; about 2 years. Nowadays, it’s home to the Maritime Museum and has been beautifully renovated by famous Dutch architect Liesbeth van der Pol. (She also makes amazing watercolor sketches. Google “Liesbeth van der Pol a sketch a day” for more…). So definitely worth a visit if you have a couple of hours to spare. Even without going into the museum, it’s worth going in to check out the ceiling in the middle of the square.

Welcome to the Marine Terrein. Less than 10 years ago the Dutch Navy had a base here in the center of town. Everything that went on in this area was super secret! It was so secret that if you would look at a map of Amsterdam you could always see a grey spot where the Marine Terrein was supposed to be. However in 2011 the Dutch Navy agreed it was a bit strange to have such a top secret military base in the middle of town and decided to sell it. Now the Marine Terrein is being redeveloped into a more friendly space open to the public, it also has a great swimming spot!

As we are halfway through the walk, this should be the perfect moment to sit down at the waterside and have a break. As luck would have it we have just arrived at one of Amsterdam’s most famous cafes! Hannekes Boom might not look like much from a distance, but once you go in for a closer look you’ll immediately realize why everyone loves this place so much. It’s not only in a perfect location, looking out over the Oosterdok, it is also a creative space for artists from the Conservatorium to perform and play music live every Sunday. Hannekes Boom translates to Hanneke’s Tree. It is named after the tree that was tied up in the canal every evening to close this city entrance for boats back in 1662.

The Vierwindenhuis, or “Four Winds House” is a housing project setup by philosopher Fons Elders and architect Piero Frassinelli. Together they tried to tackle two often conflicting tendencies of modern society: the need for privacy and the need for social contact. The way they solved this problem was by designing a building with 4 semi-public halls, one in each cardinal direction, visible from the courtyard. In Dutch ‘Vierwindenhuis’ means the ‘Four Winds house’ – which relates to the cardinal directions. Each hall also has its own element and theme: The Northern Hall’s element is water, so it has a Finish Sauna inside! The Eastern Hall’s element is earth and it has a garden. The Southern Hall has the element of wind. Inside you’ll find a little theater used by the residents. And finally there’s the Western Hall with fire as it’s element. The fire can be interpreted as the hearth of the building as this is the cafe where all the residents gather every evening for a drink or just for some company. The building is kind of like the Avatar; the master of all four elements! 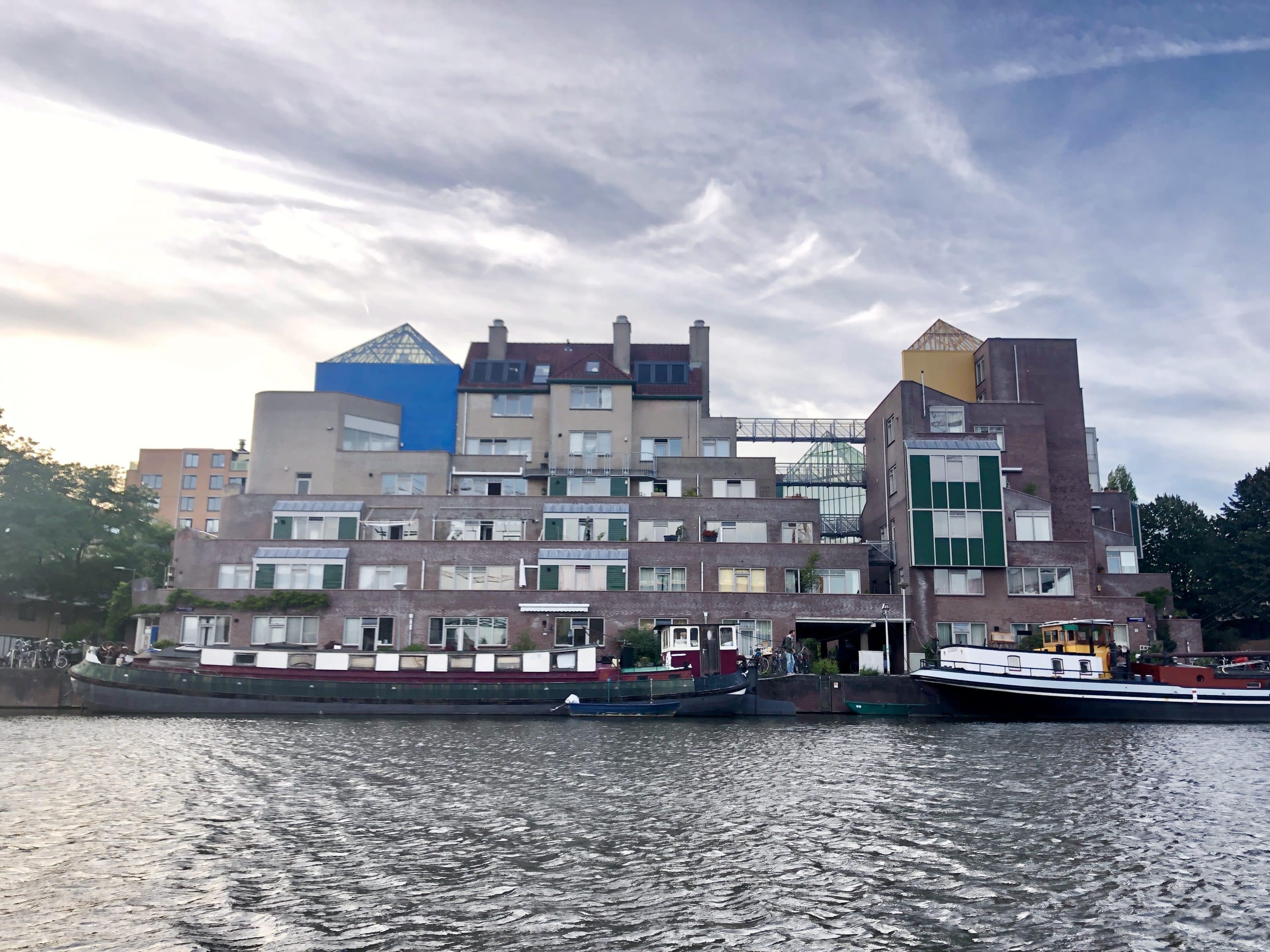 Right in the middle of Wittenburg you’ll find the last building that still calls back to the old ship wharfs that used to be here. The Markerhouse was built in 1855. Supposedly a family of 17 lived in this little house, can you imagine? They would need to all be spooning together like rabbits, just to fit in bed.

On the front of the house you can still spot the words “De werf het Groenland”. The name “Groenland” (Or Greenland) doesn’t come from the country in North America. It’s actually named after the land that the house was built on, as it used to be owned by a gardener. Fun fact, the original location of the Markerhuisje was on the other side of the water.

The East Church of Amsterdam was built in 1671. Back then the “Oostelijke Eilanden” were the heart of shipbuilding and maritime trade. A church had to be built for all the workers who lived on the islands. The church practiced reformed services all the way up to the 60’s when it had to be closed, or at least what was left of it as it was in very bad condition. In 1974 the municipality of Amsterdam bought the place for the symbolic amount of one guilder. After years of vacancy even the residents of the area started saying they should demolish it. Thankfully, it was restored to its original state in 1985. Now you can rent the space for activities like exhibitions, lectures, wedding ceremonies.

If you cross the Oostenburgergracht from the Oosterkerk you’ll come to a more modern looking bridge aka the Pelican Bridge. It is named the Pelican Bridge because it leads to Artis, the Amsterdam Zoo. But did you know that they had very different plans for this bridge dating back to the 17th century? No you didn’t! During the Golden Age of Amsterdam the city was growing at an incredible speed. Because of this a new city plan, including multiple new churches, was made to expand the city. There would be one street that would connect all the new area’s together from the West Church to the East Church: The Kerkstraat (or Church Street). To connect the Kerkstraat up to the East Church you had to go through the plantation area, where you can find Artis nowadays. Because this area was too profitable, they ultimately decided to end the street there. Bwy then they had already built the East Church. This is just a typical example of how the Dutch find money more important than convenience!

When you look across the water from the Maritime Museum you can see a small black turret like house on the corner of the bridge. This is one of 28 bridge houses in Amsterdam that was formerly used by bridge keepers who were responsible for opening these impressive structures for passing boat traffic. Nowadays there is no need for bridge keepers as you can open a lot of the bridges by simply calling a number. So in 2012 the SWEETS hotel company took it upon themselves to transform all of the bridge houses into hotelsuites for 2 guests at a time. At the moment 20 bridgehouses are already available for reservations and there’s more coming soon!

The above highlights are just some of our favorite spots along the way. If something catches your eye while en route, share a picture with us so we can share with the group next week. Email is best at info@amsterdamexperiences.nl 🙂